Through leadership and education, the MAST promotes all modes of transportation that enhance the environmental, economic and physical health and well-being of citizens in the Monadnock Region.

Please scroll down to read case studies from organizations that have participated in the Rack it Up! program. 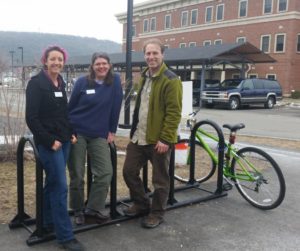 The Monadnock Food Co-op received bike racks through Rack it Up! in 2014.

The Monadnock Food Co-op was one of the first organizations in Keene to participate in the Rack it Up program in 2014. According to the general manager, Michael Faber, they were excited to participate in Rack it Up! because they wanted to help make Keene a more accessible and livable community.

The Co-op received two multi-arch bike racks through the program which can accommodate 16 bicycles at a time. These racks did not require installation; they were simply taken off the truck and set on the ground. “We would have liked to fix them to the ground, but this gave us more flexibility,” Michael explains. “Overall, the quality of the bike racks is great.”

“Part of our goals as an organization is to promote healthy lifestyles, and bicycling is quite frankly a great way to exercise and get outside to enjoy the fresh air. Over the long term, supporting bicycling as a mode of transportation is going to make our community stronger and less reliant on fossil fuels and automobiles.” 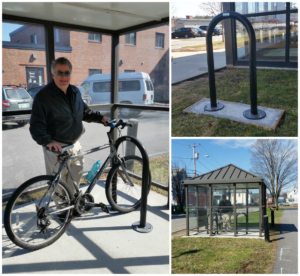 Keith Thibault  stands next to the bike racks SCS received through the Rack it Up! program in 2014. There are two racks located inside a covered shelter, and a third rack is located next to the front entrance.

For Southwestern Community Services (SCS), participating in Rack it Up! was a no-brainer. They had planned to install bike racks at their new headquarters ever since they first moved in, which was in 2009. Keith Thibault, the Chief Development Officer, says that they have a couple of employees who live in Keene who have been asking for racks to be installed since day one.

“Before, they had to chain their bikes to a tree or a fence,” Keith explains. “Now, they know they have a secure and convenient place where they can place their bikes and where they won’t get rained on if there are showers.”

Providing bicycle parking also supports SCS’s wellness goals. According to Keith, SCS has a wellness team which has been very active in the field. “I think [Rack it Up] complements our ongoing efforts to promote wellness in the organization, and frankly it was easy. MAST made it easy to participate at a low cost.”

SCS received three bike racks that can accommodate six bicycles at one time. One U-rack is located near the front entrance of their offices and is mostly used by clients. Another two racks are located in the rear of the building in a covered shelter that protects the bikes from rain and other inclement weather.

The United Church of Christ

Known as “The Church at the head of the square,” the United Church of Christ, or UCC, is about as centrally located as you can get. Part of their reason for participating in the Rack it Up! program was to help with traffic congestion and parking shortages in the downtown area. “We like to encourage bike usage because there is already plenty of traffic downtown and not enough parking,” says Mark Harris, the church administrator. “Not only that, but it’s better for the person riding, it’s better for the environment, and it’s cheaper.”

“The church at the head of the square is happy to help Keene become more bike-friendly.”

The UCC received two bike racks through the Rack it Up! program in 2014. As of this writing, the bike racks have yet to be installed. “We are hoping to get that done this spring,” says Mark. “There will be one rack by our front entrance on Central Square, and one by our back entrance.” 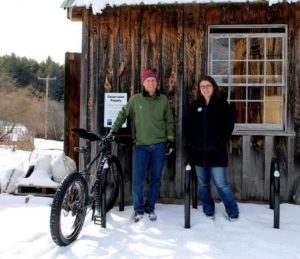 Board of Director Member, Michael Davern, and Executive Director, Julie Davenson stand next to bike racks received through Rack It Up in 2015.

Stonewall Farm is a working farm and education center that connects people to local food, agriculture, and nature through programming and events such as camps, weddings, and workshops. The organization envisions the farm as being a desination for both recreational and commuter bikers. “The farm gets a lot of bike traffic here; we’re on the rail trail so people come out here often,” says Michael Davern, a member of the board of directors. “The bike racks give people a place to park their bikes and explore the farm.”

Stonewall Farm received three bike racks from Rack It Up in the fall of 2015 and they are looking forward to seeing them used this spring.

The bike racks have been great! Very durable and easy to put together.” 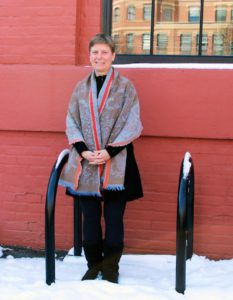 Maryann Kristiansen stands next to the bike racks that were provided through the Rack it Up! program.

The Keene-based Hannah Grimes Center for Entrepreneurship (HGC) helps entrepreneurs and local businesses innovate, connect, thrive, and grow. They offer incubator space, business programs, marketing workshops, and other resources that greatly contribute to Keene’s local economy and workforce. HGC participated in the 2015 Rack It Up program to encourage incubator associates and guests to bike to work and to promote healthy behaviors.

HGC didn’t stop at providing bike racks. “We actually put in a shower to make it easier for employees to bike or walk to work”, says Maryann Kristiansen, Executive Director of HGC. Shout to Hannah Grimes Center for going above and beyond to promote bicycling as a viable commuting alternative!